Hey everyone! Here comes my first print and first post (out of many to come). The print is alright for the first time, but I wanted to ask your help with improving obvious errors.

I printed with black MJ G+ at 100 micron XY and 50 z. I used the profile someone posted here on the forum for printing yoda, so about 14 sec exposure for most of the print and conservative lift values (4cm high, took 5 hours plus)

Questions:
-lack of detail. Would it be due to light bleed or dirty vat bottom? (Look below)
-after I emptied the vat I noticed a thick (at least .5mm) layer of resin, effectively frosting the vat. I suppose it resulted in lack of detail
-about half way through the print I see some holes in the wall of my print, I also had a thin flat layer of uncured resin stuck there. How to avoid it?

Thanks in advance for all the help!

I’m also printing with black MJ G+ at 100 micron XY and 50 z, the parameters you are referring to might have been from myself.

Another question I have is why are there horizontal layer lines, some more visible then others? I thought with SLA printers layers align better then fdm.

The horizontal lines are caused by a misalignment to the last layer. Usually it is caused by

Hey, thanks for the explanation.I don’t think any of the above tips apply here, as this is a small, hollow print, with no supports (it’s got a decent base).

In my subsequent prints, the layer problem went away, I’ve successfully printed a perfect, or nearly perfect 6cm tall head, with crisp detail and no artifacts. I’ve been printing at 100 micron in G+ and subsequently in SF, with no extra pigment. The SF is slightly crisper. Next step will be trying higher resolution. I’ll post pics soon, when the resin cures.

MY MAIN QUESTION REMAINING IS:
Is it normal to find a lthick layer of fairly solid residue on the bottom of the vat after completing the print? It’s always in the area where my print is, and I imagine it obstructs the light as it gets thicker. I speculate that if my prints were any longer (5 hours currently) It would start failing. Any ways to fix/minimize this?

@ Michal It is not normal to see a thick layer of residual at the bottom of the print. It is also very strange if the residual is in the printing area since the cured layer should touch the Teflon film directly. Maybe background exposure?

how does background exposure occur? Might it be that the built platform is not leveled correctly?

The best we’ve been able to figure out thus far on background exposure is that it’s some kind of software issue between the video card driver and the video card itself that causes full black (e.g. RGB 0,0,0) at the operating system level to be insufficiently dark on the HDMI output.

This makes black not “black” enough and results in background cure over the life of my print.

It may have something to do with a driver level setting (maybe adjustable through a vendor specific control panel) with gamma, brightness, or some other driver level image tweak parameter.

It seems to occur more often with fancier graphics cards (nVidia and ATI cards) and I don’t think I’ve ever seen it reported against Intel or cheap on-motherboard video cards.

On my setup with a Thinkpad tablet using its internal HDMI output, I get no background exposure (e.g. sheets left on the vat) even with highly reactive super clear resin that would solidify in ambient fluorescent light and light bleed all the way through.

Background exposure, however, is often across the entire projected surface, perhaps thicker in the center where the light is more intense and then more diffuse out towards the edges, generally in places not where your part is located since your part would pick up any cured material as it moved up.

Clear high-res pictures from a couple of different angles would help us understand better what you’re experiencing.

this is great info, I will try to print from another machine. I will take some photos for reference too. Thanks!

I’ve been trying to print a larger piece this time and the issue with semi cured resin accumulating on the bottom of vat is a lot more evident. Small prints managed to finish, but this one failed half way, because the layers stopped sticking to model, and instead stay on the vat. I suppose this is in fact an example of background exposure? There’s a layer of exposed resin almost all throughout the vat, but its thickest near the model. Other then that detail is amazing, so i really hope i can fix this and finish a long print.

For whoever is interested, I can confirm that lowering gamma and overall brightness gets rid of the problem completely.

@Michal: Thanks for confirming, I think you are the first person to confirm a software based resolution to this problem.

For future reference, where did you adjust the gamma and brightness?

Nvidia control pannel. What i did is put a sheet of white paper on the vat and start displaying slices. Moved gamma to zero, chandged the saturation to 0 just in case, and lowered overall brightness about 20% also as someone suggested, lowered the first lyers exposure to around 80. What exposure times would you use for SF at 100xyz? I realized i went too low and started having some failed prints.

Just to add to the discussion about Gamma – the projector also has a gamma setting and I had to use that to decrease the brightness of the blacks.

My old laptop has an Nvidia 8600M GT, the settings in the Nvidia Control Panel allow you to change the Desktop Gamma but it didn’t seem to have any noticeable effect (to my eyes) on the projector’s black levels for some reason.

It’s good that for those who are having problems with background exposure that it is possible to use the projector’s settings to mitigate the issue, but that raises some potential concerns that these users are now “on their own” as far as exposure settings go.

As you tweak gamma settings on the projector or in the driver to reduce background exposure, do you find that you also have to tweak the published exposure settings for various resins?

I too can only affect the gamma via the projector. I’m turning the brightness down from 50 to 30 and increasing contrast from 50 to 60. Let you know if that helps. I’m having a lot of general overcuring issues.

physically the brightness param is only changing.

The calibration grid is a bit less intense so lower light power but running a dry print test, the whites look to be bright enough and the blacks are as low as I seem to be able to get them. I think this is a good solution to not overcuring but also not prematurely ruining unused resin. Testing still with MJ-SF Red. I’ll report back after Isubmit this next print.

My apologies jkao, I didn’t see your question until just now. I have tried a few different settings for the exposure time and done about 20 prints with blue and yellow Makerjuice G+ at a resolution of 100 micron x,y and 50-100 micron z. The published setting of 14.6 seconds will cure the resin but I’ve done about 15 prints now and all are junk.

Basically, if you try to print a flat object (3" x 2" x 0.25") it sticks to the vat. So you have to “throw away” the printer’s speed advantage and print your thin part vertically. If you rotate the part by 10 degrees and add supports, that stops the vat sticking but you lose all print quality where the supports are, because the resin winds up curing anywhere from 1-3 mm past your part, fusing some of the support pieces to the part (at worst) and otherwise leaving lumpy, curved surfaces otherwise (at best). I don’t really want to have to add pigment, because I hate the thought of having to stir the vat every half hour while the machine prints a 7" x 0.25" mounting plate vertically to prevent vat stickage.

Blue resin may not be the best color to start with for a DLP system. It seems that some people with DLP systems have been able to print in MJ G+ blue, but generally red and black are the easiest for beginners.

You also shouldn’t think of the build area as a source of speed. Print things flat when the part needs to be flat, not because you want it to print faster. If you print the part in an upright orientation, that would allow you to adjust the projector to a higher XY resolution setting, reducing exposure time, and reduces surface area, reducing lift distance. Reductions in exposure time and lift distance are the primary means to tune a print for speed, but only once you’ve gotten the part printable.

One the topic of pigment settling and support overcure, it surprises me a bit that you’re experiencing so much support overcure. I do add pigment to my MJ G+ when I use it, but that mainly improves surface finish.

For instance, if you look at this part (which I printed at 93 micron XY resolution with MJ G+ black and no additional pigment): 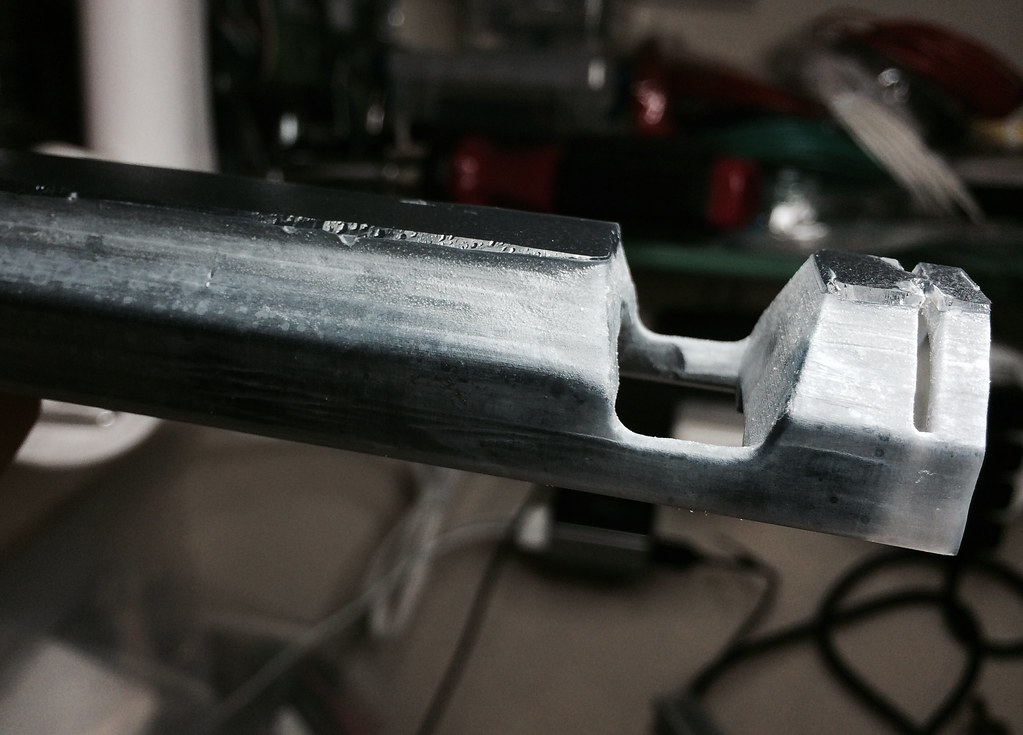 In comparison to the version with pigments added, the surface finish is significantly better (ignore the difference in the roundness of the horizontal edges, there were fillets in the earlier model which I removed for this version, dimensionally, the surfaces are the same): 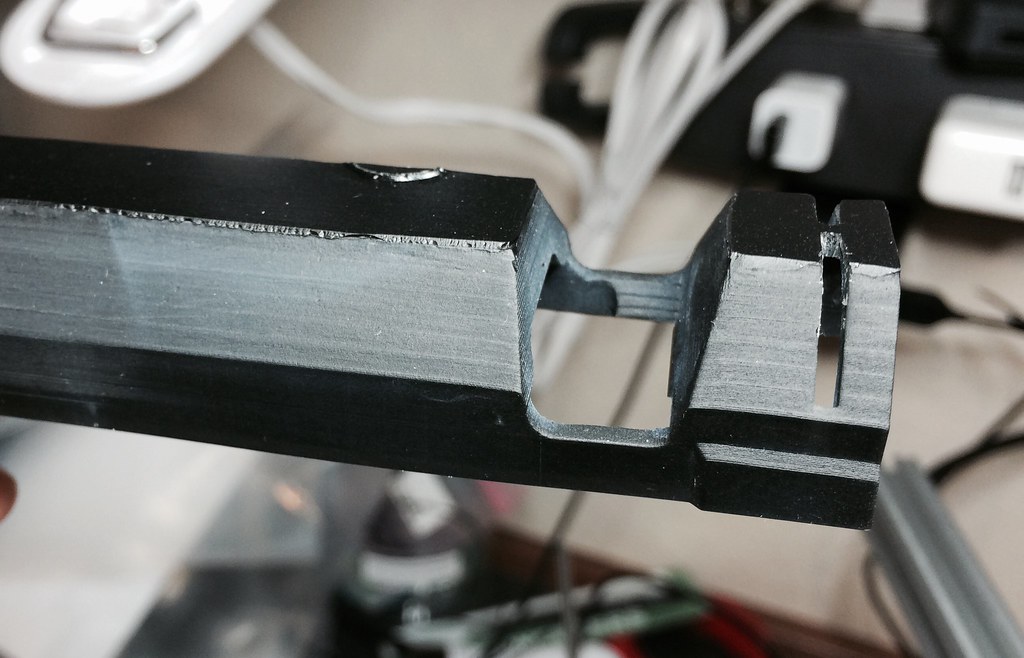 Also, both prints done in about 105 minutes and I didn’t stir a single time for either. Pigment settling varies a lot based on pigment.

Whatever pigment MJ uses seems to settle quickly. This is true for their pre-pigmented mixes too. Thus, the need for mixing to prevent settling remains even if you don’t add your own pigments. The default G+ black definitely looked settled after the print run.

On the other hand, after adding TAP Plastics pigment, I noticed that after the print, the pigmentation of the remaining resin in the vat was still even with no noticeable settling. I would encourage you not to be afraid of experimenting with pigments, you’ll significantly improve your results and ease of printing.

Now, if you really want to print flat against the build plate, maybe because you have a dimensional part that really needs perfectly flat surfaces (like say, a mold), you can do that. The key here is to lift slowly: 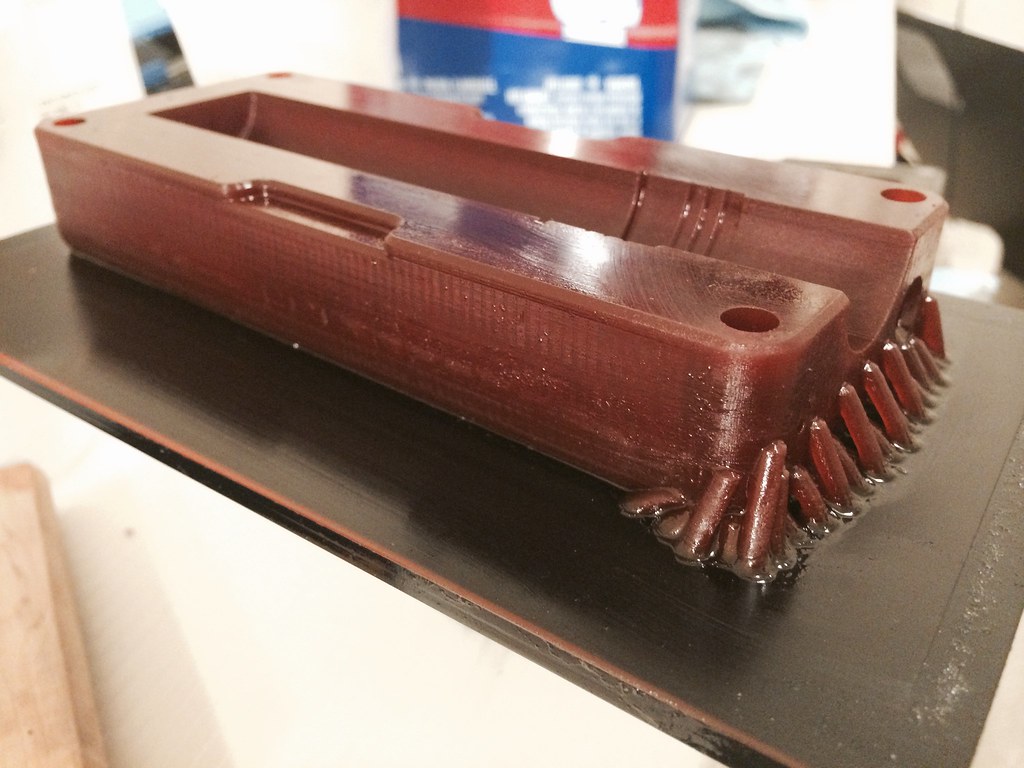 The above part was printed with very slow 10mm/min lifts across the entire part, and also printed on bare silicone (although I think with slow lifts, it would be possible to print this on a stock v2 vat).

In my opinion, you should focus on first mastering printed the part tilted with supports before trying to print flat. You really want to iterate techniques that start from a point where you can make gradual improvement rather than create a number of constraints and try to satisfy all of them at once.

With supports, I would start with exposure and seeing whether or not your exposure may be too high. If the supports are building solid and not breaking, I would leave those settings as is and then try dialing back the exposure for the part starting 1 or 2 layers after the transition from support to part.

Pictures of your prints and the problems you’re having would also be very helpful. For instance, I don’t know how tall your supports are - it may be that if your supports are taking a while to come out, that you might be experiencing pigment settling. The rate of pigment settling is not really related to whether you add your own pigments or not, and more to the type of pigment present in the resin. The default pigment will settle as well.