Did a few more experiments in the last few days with PR48, my net findings were: 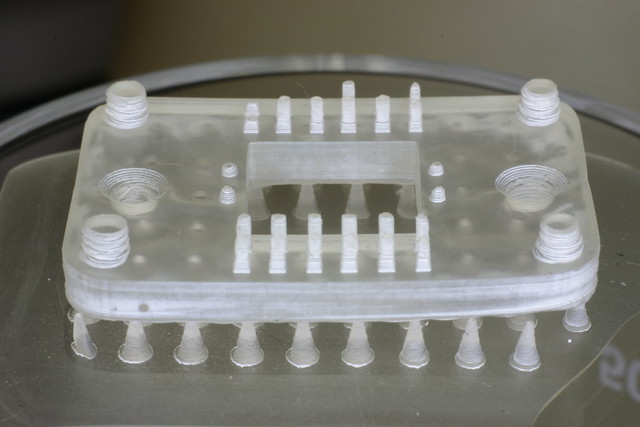 Note that the fine features failed to fully form at this resolution, but the support pillars are all distinct (you can see the grid of dots through the part on the top). 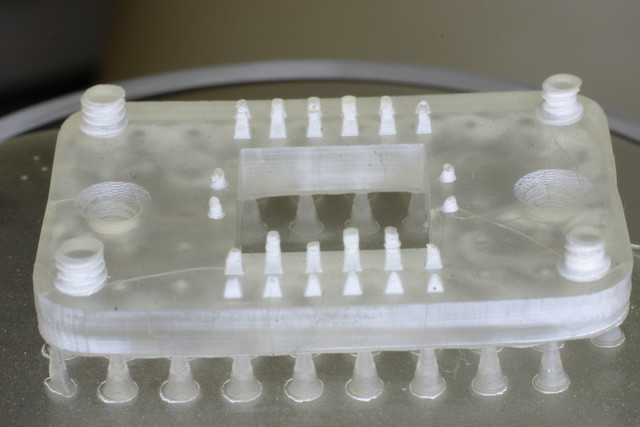 With a 16% reduction in exposure and half the layer height, the pillars and body form, but the fine top features form even more poorly. 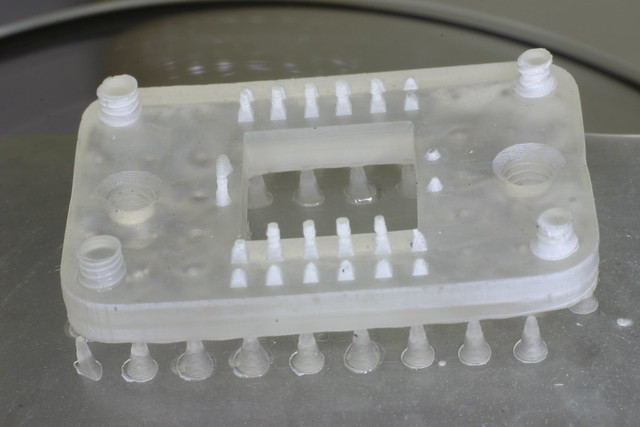 In this case, the fine features seem to actually form slightly better (especially the left half-torus); this is probably a random fluke but demonstrates that the filter doesn’t seem to increase exposure time (e.g. minimal light blocked). 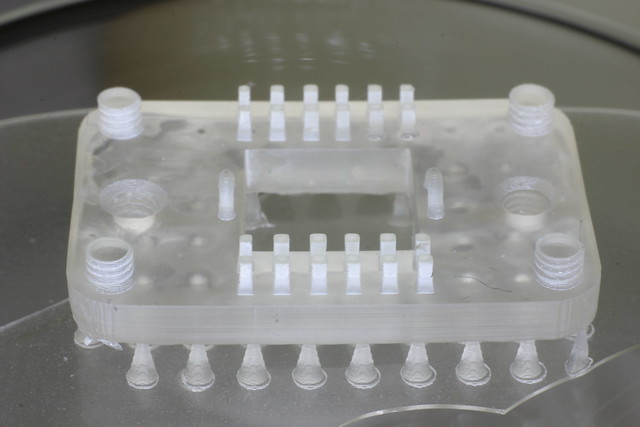 The small features all form now, and the threads look much better and fully thread-like. 1 of the 4 threads is now large enough that it engages an M3 nut, although the other 3 are undersized and the nut simply falls through. The pillars still form cleanly without being absorbed into a body enlarged by light bleed; you can see the individual grid of attachment points through the top of the part.

Are you still using the stock Titan1 projector and setup? Why are you covering the lens? I’m misunderstanding something here.

No, I have not made any physical mods to my machine.

There were concerns early on about the possibility that a catastrophic vat failure might cause resin to spill into the printer, damaging it. (http://www.kudo3d.com/forums/topic/additional-piece-of-glass-or-acylic-to-protect-electronics/).

At the time, most of the discussion was around putting an additional sheet of acrylic under the vat area, but acrylic absorbs UV and an additional part in the optical path would have the possibility of creating reflections, flare, etc… That would mean a reduction in print performance that some users wouldn’t want.

If some users adopted this protection and other users went with a stock setup, that would also create the problem that different users would require different settings, and then we would lose some breadth in settings sharing in our already small community. I’ve come out in the past as being against the notion of putting acrylic or plate glass in the optical path.

There are two areas of particular concern then: the gap around the lens and the fan vent.

The fan vent could be protected by a series is slanted and overlapping baffles propped up in some square pegs (to fit in 2 or 3 of the holes) and would redirect dripping resin off to the side while leaving airflow relatively unimpeded (although possible redirected). A part like this is simply a matter of 3D modeling.

The lens is a bigger problem since we don’t want to block any UV or <420nm visible light, nor do we want any reflections.

Turns out, a possible solution was staring me right in the face in the form of protective neutral density filters used for SLR lenses. In recent years, Hoya has come out with “digital” grade lens protecting filters that are coated with anti-reflective coatings, but omit the UV coating (which isn’t necessary for digital). These filters are cheaper and also suit our needs better.

I got one of those filters and tested it with PR48, which seems to cure on a narrower UV spectrum than other resins and more likely presents a “worst case” scenario. The result appears to be no change in exposure settings, which is good news for anyone looking to add some protection against spills without any reductions in speed or clarity. That also means that setups with and without protective filters should remain on par in terms of settings.

Thanks for the clarification. I missed the previous vat leak thread so this was extremely helpful. I’m going to purchase a hoya lens cover on your recommendation. Thanks as usual Jkao.

Very nice work. Thanks for taking the time and posting.

Don’t expect anything fancy with the 58mm filter, it’s just going to sit on top of the lens area to redirect any spills. The fan holes still need something as well: 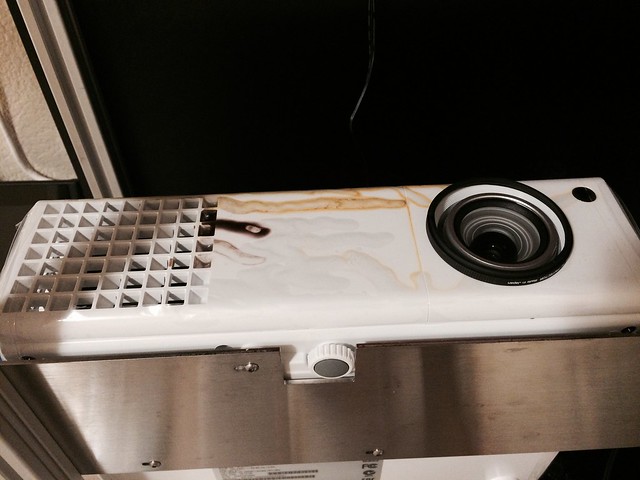 One change you’ll have to make which may be slightly to moderately annoying is that you won’t be able to put the lens lock in from the top anymore, since the wedge will stick out too far to allow the filter to sit flush.

That means you’ll have to jam the lens lock into the gap between the adjusting ring and the case, which makes it a bit more difficult to set and access.